How Every Business Is the Same: A Peek Inside the Movies 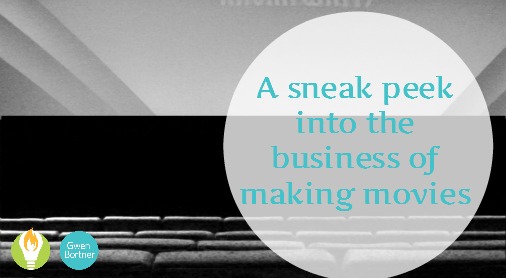 For the past two weeks my house has been an “on location” film set. Movie making seems so glamorous, but after a few small peeks behind the curtain, like most things, it is mostly a lot of work.

It is so easy to assume that any business in which you don’t have direct experience is more interesting, easier, more fun… (you can pick any descriptor you choose). But when you really get down to basics, most businesses have lots of the same characteristics, both good and bad. The trick is to figure out what will make YOU happy, what YOU find interesting, and what YOU will find easy because it is the right match for YOU!

There Are Messy Details Everywhere

Anytime you wistfully look at another person’s business, you are rarely getting the full picture. This is particularly true if their industry or finished product is associated with your hobby or some form of entertainment. Since your association is based solely around “fun,” it is easy to dismiss all that must go on in the background.

It is not that I couldn’t have figured it out – it is completely logical. But when it is not our business, it just seems like a small item. But getting access to locations includes negotiations, contracts, lots of pre-shoot visits, and many other details. And that is just one small aspect of the business.

Even when you are highly experienced in your area of business, unexpected events will occasionally upset the flow of things. Generally there are two responses:

I have no idea what the details are, but it turns out that the film crew is going to need my house for an additional day followed by a full day of cleaning (they have made it EXTREMELY dirty on purpose).

When you see a movie in its final format, it always looks like everything went just as planned. And although we hear about “multiple takes” we never consider there might have been other issues that kept the movie from being filmed as planned.

The more you can choose to be a “problem-solver” versus a “reactor,” the more successful you will ultimately be in whatever is your business. No situation is ever perfect, how we handle it is what makes all the difference.

Because I gave up my home, I was asked if I wanted to be an extra in a diner scene that takes place in the movie. I figured it would be interesting, so I jumped at the chance. Ultimately I was at the location from 10AM to 4PM with about 45 minutes for lunch. What got filmed will probably not take more than 5  – 10 minutes of screen time (assuming it doesn’t ultimately get cut).

This is not to say that things were not running efficiently – quite the opposite was true based on my perspective. But to get good raw footage, each micro scene has to be filmed from a variety of perspectives. You don’t switch between characters talking without taking the shot from both angles. This meant that heavy camera equipment and dollies had to be moved and re-positioned multiple times.

It is completely possible that only one camera angle could have worked, but the short-cut would very likely have shown up in the final version. When something looks effortless, it is rarely the case. Usually a lot of time was invested, if not in creating the end result, then in developing skills. And most often it is a combination of both.

Making Movies Is a Business Too

More than anything else, I have realized that everyone’s business, regardless of what it is, has similar issues both good and bad. If it is something you love, then the long hours don’t seem so long. Although the view from the outside may seem all “sunshine and roses,” every business has similar issues and challenges. And ultimately, no one is ever successful without investing the time and effort needed for the job at hand.

PS — An extra perk of this whole process was that I got to meet and speak briefly with a star from one of my favorite shows of days gone by… that officially gives me a Bacon Number of 3!