What a Broken Leg Taught Me About Confidence 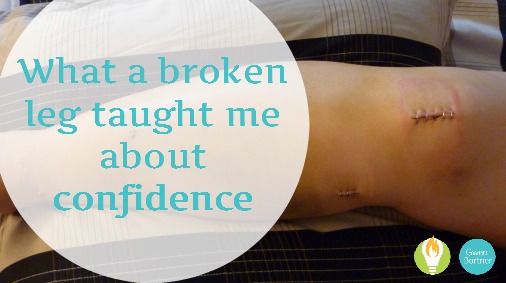 In case you don’t know, I have been a PSIA certified part-time ski instructor for the past 8 years. I also broke my leg skiing about 5 years ago. Luckily it was near the end of the season so I had plenty of time to physically recover. Mental recovery took longer.

The scenario was fairly simple: we were on a week long trip to Aspen with friends. The first day was a beautiful day for skiing and we had enjoyed the morning and were heading to the base of the hill to take a lunch break. I was making some wide, smooth, rather fast turns as we were headed toward the bottom. I noticed that the lead part of our group had stopped, so I started putting on the breaks and the next thing I knew, I was on the ground and my right foot/leg felt strange. I yelled for my husband to come up and help me and when he arrived he quickly ascertained that this was much more severe than I imagined: I had broken my leg.

I could see the bottom of the hill! But it was going to require a sled ride to get there.

Here’s a pro tip for you: Break your leg before lunch and you beat the rush at the hospital! I was out of surgery before the lifts closed for the day. But that was the end of skiing for that season.

Several months and lots of physical therapy later, I was getting around without issue. So I knew I would physically be able to ski the following season. But I could also tell that my confidence had been smashed. A basic fundamental of skiing is the ability to stop; it is the first real skill that we teach. And I had broken my leg while engaging in this fundamental move. “Maybe you CAN’T really ski,” the voices in my head kept saying.

You see, I am not naturally a confident skier. But prior to the accident I had made huge strides in my skills and as a result I had gained confidence. But now all that was gone. I had to go back to the drawing board.

To recover my confidence, the following season I focused on the 3 Ps – Patience, Perseverance, and Practice.

When you know you can do better, but just don’t seem to be succeeding, it is easy to lose patience. So I promised myself that I would be patient with myself. It had taken me years and years of focus to achieve my prior skill and confidence level, so I knew it could take several seasons to get back to that same level.

By being patient with myself, I was able to recognize and celebrate the small wins as they came instead of just continually talking down to myself. I was also able to set and share goals that were still a bit of a push, but achievable and ultimately valuable in reaching my final destination.

Because I knew I truly didn’t have any physical limitation (it was all in my head), there was a need to constantly push myself. I am often asked to teach the adult students who are returning to the sport after an injury, because I can truly relate. I also understand the importance of advancing with caution, but still advancing nonetheless.

My most challenging push was to attend instructor training that year. Two years earlier I had made huge strides and here I was coming back, skiing worse than I had when I left. But I went because I knew it would be good for me even though it felt humiliating at the time. And of course, the training and support I received was immensely valuable.

The phrase “practice makes perfect” is only true when you are practicing the “right” thing. So that became my primary focus: to not pick up any detrimental habits or behaviors during my first season back on skis. That may not seem like much of a challenge, but it was an important goal and ultimately served me well.

So my first season back I continued to teach, ski during my free hours, work with my mentors and focus on my goal of becoming a confident skier once again. When the season came to a close, I had made only a bit of progress and resigned myself to a long road to confidence recovery.

The next season, I made significant more improvement and by the end of the next season (just 3 years later), I was skiing better than I ever had previously. I was once again skiing with confidence.

But what was most important wasn’t that I took big strides at the end of journey, but the tiny steps at the beginning. Without taking those tiny steps I never would have gotten to the bigger ones. Confidence isn’t fueled through major accomplishments without first being sparked by the small wins. And the small wins require patience, perseverance, and practice.

As I spent the beginning of this week enjoying a mini-ski-vacation with Arlis I thought a great deal about my journey to finding, losing and re-finding confidence on the ski slope. I still have a long way to go to reach my ultimate goal (any terrain, any condition), but know if I continue to apply the 3 Ps, I will get there – eventually.