#1 – Come Prepared, But Be Ready for Anything

One of the charms of live theater is that in any performance, anything can happen…and sometimes does. There are no re-takes if a line is flubbed or a mark is missed. Theater actors know this and are prepared for it. They diligently study their lines, practice their choreography and attend rehearsals, but as the saying goes…”stuff happens!” Excellent actors are able to adjust and improvise, often without the audience ever knowing that something was amiss.

An excellent speaker will have similar skills. For speakers, more often than not failure comes in the form of a technology glitch. Being prepared and able to present even when you can’t show the PowerPoint slides you spent hours perfecting is the sign of a true professional. Just like acting, you might have to adjust, improvise and get creative with very short notice. And always have a copy of the “script;” you never know when you might need it!

#2 – A Live Audience is Unpredictable

I was recently listening to an interview of several movie actors discussing their theater experiences. They all shared different stories about the “house” (theater-speak for the audience). In one case an individual was trying to direct the action on stage from their seat. In another, the “energy” of the audience was “off.” And inevitably there is the story of the medical emergency occurring in the front row.

Any of these instances can happen to a speaker as well.  Knowing how you are going to react before it happens to you the first time will greatly assist you in dealing with the situation. Are you the speaker at an evening session after there has been an open bar cocktail hour? Then the chance of drunken behavior will be higher. Are you presenting to a group that is expecting bad news? Then the energy in the room will probably be negative – if not hostile. Thinking about what might go wrong and making a plan can significantly minimize the negative effects if the situation does take a bad turn. 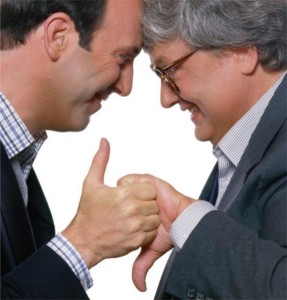 Before the days of the internet and social media, playwrights stayed up late the opening night of a show to read the first reviews. The review would determine whether the show would continue or close after just a few nights. No excuses, no second chances.

Most speaking engagements are a one-shot deal.  If there is to be a second performance, it is usually only scheduled after the reviews come in. Every time you accept a speaking engagement, you have to treat it like a make-or-break event. After you have established yourself, a poor performance won’t cause permanent damage to your reputation; but early in your career one bad performance could be your last!

So the next time you attend the theater, keep an eye on the stage — there is no telling what lessons in speaking you might  learn from the thespians to make you a better speaker.