The 5 Most Valuable Tasks I Accomplished in 2015 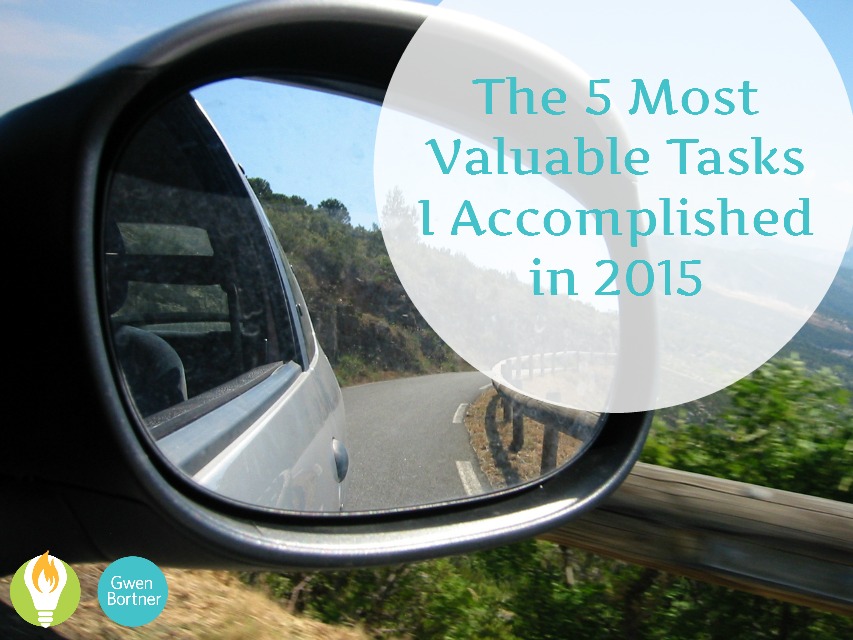 The beginning of the year is a great time to reflect on what happened during the previous year. Although we sometimes get caught up in our failures, acknowledging and understanding our successes is extremely important.

For the past three years I have been participating in Michael Hyatt’s Best Year Ever (BYE) program (registration is only open until January 7th). One of the things that I have appreciated about his approach is that it centers around identifying and acknowledging the positive without ignoring the challenges. I cannot with all honesty say that 2015 was, in fact, my best year ever (but I think without BYE it would have been even less so). Even so, there were some serious successes along the way that I might have otherwise missed had I not intentionally reflected on 2015.

Top 10 lists are always popular this time of year, but I wanted a number that I didn’t feel like I had to stretch to reach. Like I said earlier, 2015 came with a full set of challenges (at least mentally)! However, in terms of my business, five accomplishments stand out and are noteworthy for me, particularly based on what I learned from the experience.

1. I Joined a Mastermind Group

In fact, I actually created the group that I wanted to join. This process started at the end of 2014, but we weren’t able to get it together enough to meet until the beginning of 2015. Gathering the participants was a bit more challenging than I expected. It would have been easy to give up long before we got started, but the extrovert in me felt the need for more interaction than I normally engage in during an average week.

Because I created the group myself, it truly meets my needs, but based on feedback and interaction, I know it does for the other members as well. Our group of 6 meets monthly via Skype. We each share a brief update about what has been happening and then one member gets 30 – 45 minutes in the “hot seat” to present their pressing issue/questions while the other 5 provide feedback and insights. Although we share some commonalities, it was also important that we each bring some unique perspective to the conversation.

Even when I wasn’t feeling much success in my own endeavor, being able to provide the occasional insight for others help me not give up hope for my venture. Also, as the group has gotten to know each other in meaningful ways, I find I seek their expertise (and they mine) between our regular meetings. Of late, we continue the conversation between Skype calls on Slack, which so far has been very helpful! If you would like to start your own mastermind group, you can enter your name and email below for a FREE copy of my 10-step quick start guide.

2. I Gave Myself Permission to Fail

Obviously doing this all the time won’t really result in success. However, as a person who is all about achievements, goals, and checked-off task lists, this was an important step for me. The key being that I didn’t just beat myself up over the various situations I viewed as failures, but instead was able to look at each of them with a somewhat analytical eye and determine why I ended up where I was.

As such, some areas of both my business and personal life languished while others found new or continuing success. Understanding how the two were related (at least in some cases) was a very new and important insight. It also gave me a new appreciation for the importance of being able to let go and start fresh when it is required. Not everything has to continue forever. Some ideas and projects have a short life, others are more lasting. One is not better than the other; they are just different.

3. I Discovered the Power of a Long Vacation

In September I was on a cruise ship for 3 weeks as we did a transatlantic crossing from Copenhagen to New York. During at-sea days I was teaching, so it wasn’t really a vacation for me (although I still found it fun and wonderful), but it was a vacation for my husband. During our time away, I watched his attitude relax, his mind become more open and creative, and his overall demeanor completely change in fabulous and positive ways.

This experience made me realize that when we are deeply invested in our work either mentally, emotionally, physically, or some combination of all three, one week away is just not enough; the real benefits of being on vacation did not surface until part-way through the second week. But more importantly, the benefits were HUGE. As entrepreneurs, I can imagine this is absolutely true (possibly more so) for us as well.

I believe it is so important, I am adding a minimum contiguous 2-week vacation to my goal list for 2016. And not a vacation where one of us is working in any significant capacity, but where we are both fully engaged in vacating from our “normal” lives.

4. I Created Space for New Ideas

At the end of the year I took a sabbatical of sorts. In this case it was a sabbatical from one occupation to focus on truly engaging in a new one (this one)! However, I knew that working in my same environment would most likely produce the less-than-satisfactory results I have achieved in the past. So I rented a tiny condo up in the mountains for 4 weeks.

Although it did not quite start as I had planned, ultimately the time away was just what I needed. The distractions that exist in your regular environment, many of which you are not even aware, are missing in an unfamiliar place. And because everything is new, your problem solving skills and creativity are engaged on a nearly constant basis.

What I was specifically hoping to achieve was a clear direction for this business, which I feel like I now have. It also gave me space to envision the Weekly Course of Action newsletter which I sent for the first time earlier this week (click here to sign up). Most importantly, I got excited about the services I can provide and the prospect of helping others succeed.

5. I Didn’t Wait to Get Started

When new things are planned for the beginning of the year, and only a few weeks of December remain, it is easy to decide to, as my friend says, “screw off and eat fudge.” Honestly, some version of that was my typical mode of operation for most of 2015. So no one was more surprised than me that by the time year-end hit I had quite a bit of work for the new year already in the can.

In fact, this post is just one example of me getting ahead. The next few weeks are particularly busy with meetings and travel, so posting will be challenging at best. But delivering content on a consistent basis is a proven element of success for most online entrepreneurs. In fact, almost every successful entrepreneur in the blog-o-sphere will share that much of their consistency comes from getting ahead of the curve weeks, if not months, in advance.

Every time I have tried to implement anything on a regular schedule and just started without a plan, I ended up missing my own deadlines almost immediately. I also have been woefully unsuccessful at motivating myself to meet advance deadlines, so this really is huge. The only thing I can figure is some combination of the four achievements above helped me see that this was the only reasonable path. So now my goal is to stay ahead – time will tell.

What was one of your most valuable accomplishments in 2015?