It doesn’t matter how much time you have

It doesn’t matter if you have 40 hours a week to work on your business, or 4. The most important thing is that you put your whole focus into the work that you do, in the time that you have. If you can discipline yourself to do this, you will see growth.

Rethinking Failure – It Is Not Black and White

Failure is a harsh word. But it is often the word we associate with a scenario that doesn’t turn out in the successful, happy, satisfying way that we had originally planned. But I don’t think looking at something as a failure is really helpful.

If something isn’t a success, we often jump to the opposite and call it a failure. But rarely are projects and activities so clearly black and white. In reality, most things we engage in fall along a spectrum. To delineate anything that does not hit the ultimate success mark as a failure is just not fair.  Failure is all about negative connotations. Along with that comes lots of negative emotions – neither of which is usually helpful in the long run. How much better would it be to grade our goals and objectives on a scale, looking at each element and component individually instead of lumping the whole thing into a single pass/fail mark?

END_OF_DOCUMENT_TOKEN_TO_BE_REPLACED 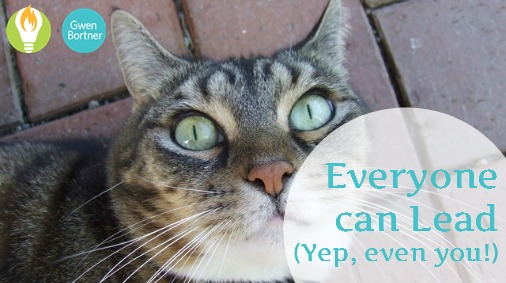 Don’t think you qualify as a leader?

Depending upon your personality, being labeled as “leader” can have either very good or very bad connotations. Some of us find ourselves in leadership positions without much effort or trepidation while others try and avoid the role like the plague. Regardless, I believe everyone is called to lead from time to time – and everyone can be a leader. If you’ve been asked to volunteer for a leadership position, it can be helpful to remember the ways you have been a leader in the past. Don’t think you’ve got any? Let me start with some common examples not often tied to the word “leadership.”

END_OF_DOCUMENT_TOKEN_TO_BE_REPLACED

Doing More of What You Already Love Doing

I am lucky – I have a job that I love, and I am very good at my job! I earn a reasonable living wage! And I don’t take any of this for granted because I know that I am the exception, not the rule. At this point in time, 90% of my income is generated through teaching.